Everyone who has worked hard deserves to retire at some point. And this, we feel, goes for snakes as well.

Our kingsnake, Spike, is approaching 24 years old, and we feel it’s time to give him a well-deserved rest. Spike has been instrumental in converting people from fearing snakes to respecting snakes. For many, just thinking about snakes gives them chills. But those who have had the opportunity to handle this gentle reptile discovered that he posed no threat as they experienced him undulating through their fingers. Several even commented that the slithering sensation was somewhat calming.

Spike’s career began as classroom educator where he helped students understand the importance of snakes in the ecosystem, then moved on to include RV parks, libraries, visitor centers, and science centers to educate a broader population. It also included several television appearances where he charmed the weatherman who used him to help deliver the weather on the 4:00 news in Yuma, AZ.

But over the past few years as he’s aged, Spike’s muscle tone has diminished and bumps of possible arthritis have formed along his spine, making him more difficult to handle. Without his ability to constrict, his four-foot body slumps and dangles and slips through our hands. Whether this is uncomfortable for him, we cannot tell. But it’s certainly not the way he should be presented.

With this in mind, we decided to retire Spike and let him live the rest of his days in luxury and solitude. To take up where he’s left off, we acquired a young California kingsnake that we named “Rex.” Even though he is small at this point, Rex is a voracious eater, attacking the dead mouse that Chuck dangles in front of him as if he just emerged from a year’s hibernation. But he takes well to being handled and likes to intertwine through our fingers and slither up our arms. He recently had his first experience educating youngsters at Arizona’s White Tank Mountain Regional Park. We are looking forward to introducing Rex to more school children and adults who will hopefully learn from this youngster as others have learned from Spike.

When we arrived at Lake Woodruff National Wildlife Refuge in Florida at the beginning of November, 2014, we made plans to drive to Tampa for the reptile show the second weekend of the month to try to locate a western hognose snake to replace Roggen, the one we’d recently lost. 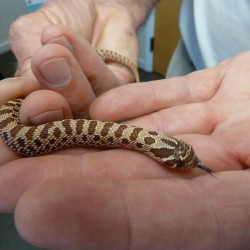 Skirting visitors and other exhibits, we finally located a vendor that specialized in western hognose. On their table were small plastic containers, each holding a hognose labeled with sex, exotic types and colors, and prices ranging from $125 each. One larger container displayed a cluster of standard, unaltered hognose babies writhing together in coils. This container was labeled “$60 each.”

“We need a male,” we told the exhibitor. Because males are smaller than females, they take up less space, a big consideration as we travel in our RV.

But the exhibitor wasn’t sure how to sex these young snakes. “Check with the guy in the blue shirt,” he said, pointing to another exhibit.

While most experts sex a snake by probing their cloaca, Mr. Blue Shirt indicated that he could determine the sex of a hognose by examining the length of their tails. He opened the container of snakes and looked at each one. “Female,” he said, putting the first one back. “Female, female, female, female,” he repeated for the next few. And then, “Here’s a male!” He handed the 2-month-old hognose to Chuck.

“This is our guy,” Chuck said after some examination. The vendor place a paper towel in the bottom of a small round plastic container, put the snake on top of it, and seal a lid on top. Breathing holes lined the rim of the container.

“How about Woody for a name?” Chuck suggested on the drive back to the refuge. The name was in reference to Lake Woodruff NWR where we were spending the winter. But since a western hognose is not from the Florida area, I said I would prefer something western.

After we arrived back at the refuge, Chuck placed the new snake in Roggen’s old cage. Then he took pictures and put them on Facebook. We were thrilled with the congratulatory responses we received, and even though we didn’t ask for a naming contest, we were offered some suggestions.

“We think his name should be Harley, as in Harley Davidson, the Hog,” one friend offered.  But since we are not motorcycle people, we put that name aside.

“I would name him Woodrow and call him Woody,” another friend suggested. But we had already put decided against that name. This friend, however, followed with another comment, “I changed my mind. I like Harley, too.”

In the meantime, other friends weighed in with their comments. “I agree; I think the name Harley is very appropriate!!!” and “I like Harley!”

So, thanks to our Facebook friends, our new hognose snake is now officially “Harley”!

After nearly 22 years of service, our kingsnake Spike deserves a rest, and we have decided to let him retire. We plan to keep Spike and let him live out his days in his large enclosure with a spacious snake house and large water dish.

To take over the role that Spike performed in our reptile program, we have engaged a new snake for our collection. “Beau” is a Rosy Boa about two years old, according to the reptile shop where we obtained him. Although not yet fully grown (snakes actually grow throughout their lives, but slow down after a certain age), Beau is a good size to handle and show to a classroom of students.

Beau is also an attractive snake and seems quite docile when handled. His species is native to Arizona where we intend to present most of our programs.

We welcome Beau to our education efforts and look forward to introducing him to many school children.