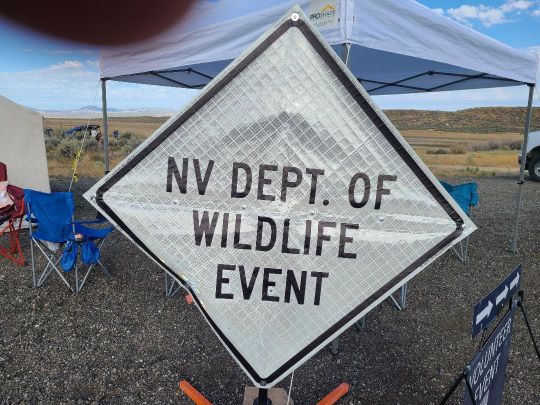 Please join Nevada Department of Wildlife for a Herp BioBlitz in the southern Ruby Mountains and northern Diamond Mountains in northeastern Nevada. “I was thinking of you when I received this message,” emailed Ruby Lake National Wildlife Refuge Interim manager, Tim Pratt.  “We have full RV hookups here in the event that you are interested in volunteering!”

It took us only a few minutes to decide that YES we were interested! We had worked with Tim at the National Elk Refuge in Jackson, Wyoming, and we looked forward to working with him again.

We’d never been to Ruby Lake NWR, but we had heard that it is remote. This proved to be true when we left Ely, Nevada, drove 30 miles north, and then turned onto a dirt road for another 67 miles. After splashing through a few puddles of rainwater and cruising over the dusty road, we arrived at the Refuge with our filthy camper.

Over the next few days, we surveyed reptiles on the Refuge in preparation for joining the BioBlitz over the weekend. The BioBlitz was sponsored by the State of Nevada to survey species in remote areas. This year, reptiles and amphibians were the focus. Accompanying us on our first survey were the Refuge biologist, Dan Dewey, and the seasonal biotechs, young men with degrees in wildlife management and biology.

As we walked a dike along one of the canals searching for reptiles on or around rock piles that lined the area, I spotted a snake in the rocks. “There’s a gartersnake!” I announced as I watched the snake disappear between two large rocks. Although I assumed the snake was impossible to capture in that rock pile, biotech Michael Snead peered into the crevices and spied the snake’s head. “Right there!” he said, pointing it out to biotech Logan Wirth. When Logan lifted the rock, the snake slithered out into open area, and I captured it so we could photograph and record this species. “He didn’t poop on me,” I told Chuck when he caught up with us. Generally, a Western terrestrial gartersnake seldom bites, but they will excrete a smelly substance in their defense.

Encouraged by our first success, the biotechs searched in earnest for other snakes and lizards. When Michael located another snake that slithered into the reeds, he pushed into the stalks to capture the snake. “I hope that’s not a rattler!” one of our group said, relieved when Michael lifted out another gartersnake.

The next day our group drove to an area more likely to harbor rattlesnakes, and after much searching, Dan located a Great Basin Rattlesnake that disappeared into a thick packrat midden. Chuck lifted layers of the midden with his snake tongs and finally spotted the snake after hearing its rattles.  As the snake slithered out, Dan captured it with another pair of tongs and lifted it for us to see.

On Friday, we joined Dan and the three biotechs and headed to Jiggs, Nevada, an hour’s drive over a pass. Once there, we met with the group volunteering with the BioBlitz and listened to instructions before splitting into teams to explore different areas. Our group drove to a wetland area at the base of a large butte. While the others disappeared into the trees, Chuck and I lagged behind to gather our packs and water. By the time we joined the group, Logan had located a gartersnake. Unlike most of its species, this snake had bitten Logan’s finger and held on, dangling like an extension of one of his fingers. But Logan remained unfazed. I pulled out my water bottle and poured water over the snake’s head until it released its grip and dropped into Chuck’s hands.

The last day, we explored several different areas in search of reptiles. At one location, we climbed a steep, shale-laden hill to inspect rock outcroppings and boulders toward the top. I followed biotech Patrick Chastan as we peered into crevices, lifted logs, and examined boulders.

Over the weekend, we located several gartersnakes and rattlesnakes, a gopher snake, and a few lizards. Dan pointed out that gopher snakes were often seen last year stretched across the road.  This year, very few were located.

We were beginning to realize how much we missed living and working on a wildlife refuge where we encountered and interacted with seasoned wildlife personnel and enthusiastic young people. Conversations centered around our work and the studies happening on the Refuge. Talking and working with the young biotechs gave us a glimpse into their passion and dedication to wildlife and its environment. The next time we hear an older person say, “You know what’s wrong with the young people these days?” we are likely to answer, “Nothing!”

8 thoughts on “BioBlitz for Reptiles”