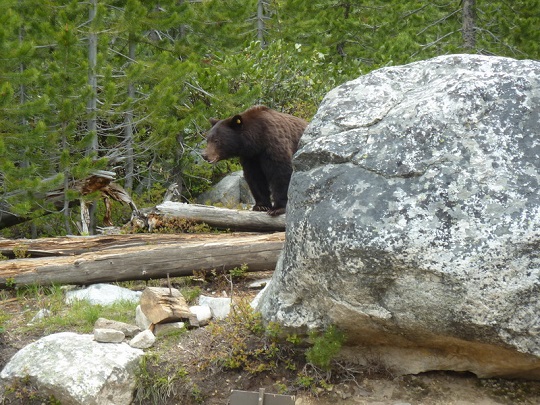 “Should I carry bear spray?” is a frequent question we get from visitors to the Tetons. They fear attacks from bears, mountain lions, wolves, coyotes, or just about any animal with four legs.

Many hikers carry “bear bells,” jingly bells that supposedly warn an animal that a human is approaching. Locals call those “dinner bells.”

“Do you know how to tell the difference between the droppings of black bears and grizzlies?” we often ask visitors. When they shake their heads and lean forward to be educated, we tell them, “Black bear droppings contain berries, seeds, vegetation, maybe bits of hair. Grizzly droppings contain bear bells!”

While this often elicits a chuckle, it helps to illustrate that the bells are virtually useless. In fact, it has been demonstrated that they might even attract a curious animal.

So……..have we ever had to use bear spray? we’re often asked. We’ve pulled bear spray whenever we’ve seen bears or moose (which are actually considered more dangerous than bears), but we’ve never had to use it on a wild animal. However, we have used it once in a neighborhood when a large vicious dog ran across the street toward us in attack mode. Chuck pulled the bear spray and discharged a short spritz. The dog screeched to a halt, took one sniff, and high-tailed it back home.

But just because we’ve never had to actually use bear spray in the wild does not mean that we would go without it. “We always carry bear spray with us,” we tell people. “It’s recommended and has been proven very effective in deterring an aggressive animal. You likely won’t need it, but think of it as cheap insurance.”

We once ran across a lone woman hiker in a wilderness area where we’d seen no one else. Her husband was at a conference in town, and she had decided to take a hike. “Are you carrying bear spray?” we asked her.

“I haven’t seen any animals,” she answered carelessly. “I don’t need it.”

Since bear spray would be her only defense if indeed she was confronted by an aggressive animal, we encouraged her to take one of our extra canisters and showed her how to use it. Not long after, she passed us on the way back toward civilization. “You made me realize how defenseless I was,” she said. “I won’t hike without it again!” By the way, we told her, it works on people, too!

“There’s only one animal out there waiting to attack you and eat you,” we tell visitors worried about hiking on trails.

That may ease their minds, but we still encourage them to carry protection and learn how to use it…….just in case!