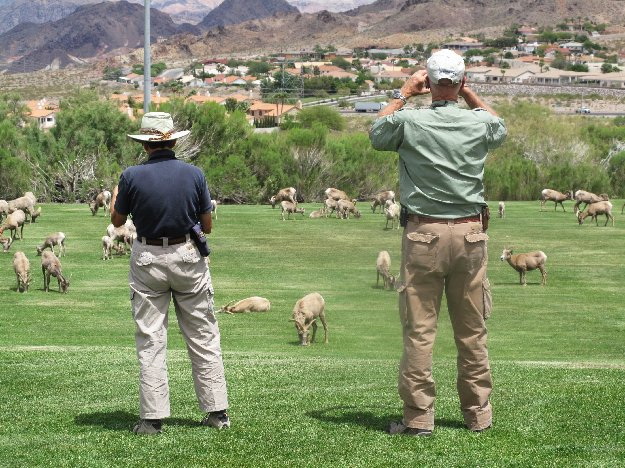 “You can come and help out, but I hope you don’t get bored. There might be a lot of down time.” After inviting us to a bighorn sheep capture and collaring, Desert National Wildlife Refuge biologist Lindsay Smythe warned us in advance that we could be disappointed. “Sometimes the sheep don’t come down,” she said.

Bighorn on the Hill

Since we were visiting Desert NWR for a few days on our way north, we couldn’t pass up an opportunity to be involved with this event! We accompanied Lindsay on the hour drive to Hemenway Park outside of Las Vegas, NV, where bighorn regularly descend the rugged hillside in the heat of the day to graze on the manicured lawn in the park. Horse trailers were parked in the parking lot in the hopes of capturing and relocating several large rams.

Three ewes had been captured and collared the day before, but no suitable rams had come close enough that day. Through our binoculars, we counted at least two dozen sheep grazing, lounging, or wandering far up the rocky hillside. They appeared to be in no hurry as they monitored our movements from above. A myriad of bighorn droppings littered the grass throughout the park, leaving evidence of their previous visits. But perhaps Lindsay’s warning would come to pass and no sheep would descend to the park this day. Nevertheless, we were excited just to be included in this venture.

Finally, one brave youngster began making his way down, negotiating the rocks, appearing over a nearby hillock before galloping onto the grassy field. I was surprised to see this year’s baby all by itself. “Young rams are not too bright,” biologist Craig Stevenson informed me at that point. “That’s why they tend to die early!” 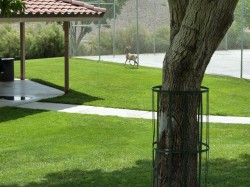 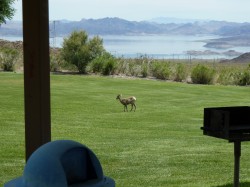 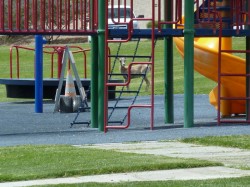 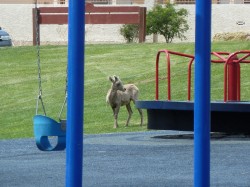 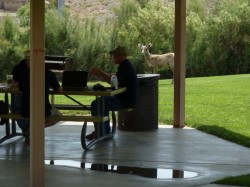 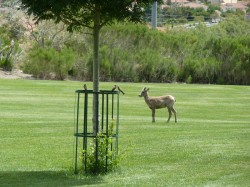 After waiting most of the morning, we finally spotted a group of bighorns standing atop the little hillock, surveying the scene for possible entry. The group consisted mostly of ewes and their young, as well as several rams that were identified to us as two and three year olds, although they sported large horns that could have fool us neophytes into thinking they were much older. “Watch them sniffing the females,” Craig said. “They don’t have a clue!”

I decided to head to the restroom so I would be available when the sheep arrived. When I emerged, someone motioned for me to look behind. I turned to discover the small herd entering the park on all sides of me. Unconcerned about observers, they wandered about, grazing on the cool grass. No suitable rams showed up, but biologists would choose several ewes to radio collar and examine before releasing them to the herd.

“The collars put on at the capture are just marking collars with no VHF capability,” says Lindsay. “We do this for a couple reasons:  kind of like banding birds, it allows us to keep tabs on individual sheep (the colors can be seen through binoculars), so we know if that animal has already been caught, how long it lives, if it has a lamb every year, if it moves between mountain ranges.  Marking enough animals also allows us to estimate the population using a mark/resight method.” 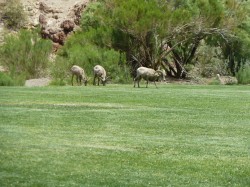 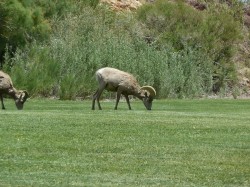 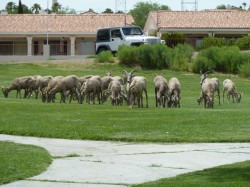 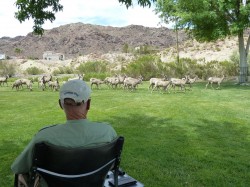 The marksman readied his rifle and waited to have a ewe designated for the first dart. When he had fired the dart at the selected animal, we all waited for it to take effect. As mere observers, not knowing exactly which ewe was hit, we surveyed the group until one finally separated from the herd and began staggering. Soon she laid down, eventually laying on her side as if sleeping. 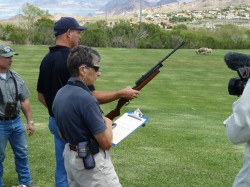 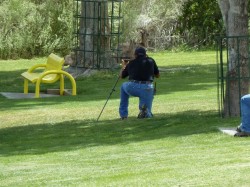 After a minute, when the marksman approached her and snapped his fingers, she flinched. The team waited another few minutes until the ewe was unresponsive to the finger snapping, a sign that the sedative had taken effect. 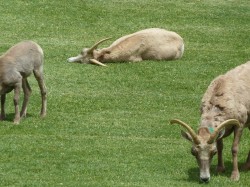 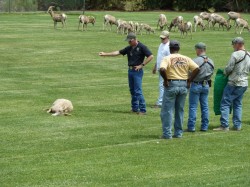 While the remaining bighorn sheep continued grazing, the team loaded the ewe onto a tarp and carried her to a scale to weigh her before placing her on a table under a shade cover. There, several veterinarians, biologists, and volunteers worked quickly to take blood samples, heart rate, and temperature, as well as administer medications and place a collar around her neck, all the while monitoring her condition. An experienced volunteer donned gloves to poke her fingers into the ewe to retrieve a fecal sample. “I was the only one with small enough fingers for this job!” she said. 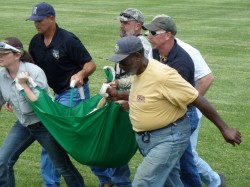 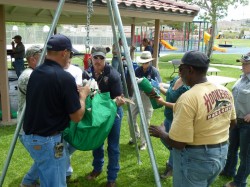 “Most of what we were doing,” says Lindsay, “was monitoring the animal’s condition in response to capture. The term ‘capture myopathy’ is basically physiological damage caused by capture stress that can kill an animal while you are handling it or after it is released.”

Temperature, she says,  is usually the most immediately important. If the animal gets too hot it will die on the table or suffer irreversible brain damage. Some immobilization drugs interfere with an animal’s ability to thermoregulate, and the vets are always looking for better combinations to use. 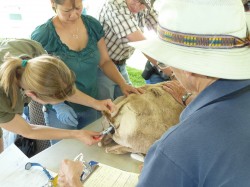 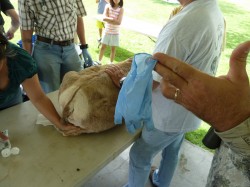 “That’s why they were trying to get blood samples from the arteries,” says Lindsay, “to test the sheep’s blood oxygen levels during handling. And we were monitoring respiration and heart rate for the same reason, to make sure the animal isn’t in distress as it is being handled and to monitor the effectiveness of the drugs used.”

They examined teeth and horn rings to age the sheep, as well as making a subjective assessment of their body condition by looking at and feeling muscle thickness and fat at the shoulders, hips, and rump. They also checked for any abnormalities or capture related injuries, drew blood from the jugular to test for disease and genetics, and swabbed nasal passages to test for pathogens.

All findings were recorded according to the time they were taken. Also recorded were any markings that might identify this particular animal. This ewe had a slightly torn ear on one side and a scarred ear on the other. The collar was a color unique to this animal so she could be identified from aerial surveys.

A few children wandered over to witness this event. “Do you mind them watching?” I asked one biologist.

After finishing as quickly as possible to avoid undue trauma to this animal, the team carried her back to the grassy area to administer a reversal drug that would awaken her. At first, she wobbled about, but eventually the drug took effect and she joined the rest of the herd as if nothing had happened. Her lamb raced to her to begin nursing. 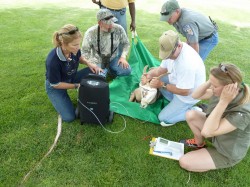 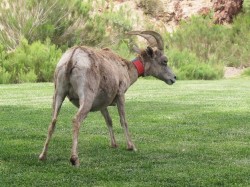 This ewe would now join others to provide information that would help ensure their future welfare.