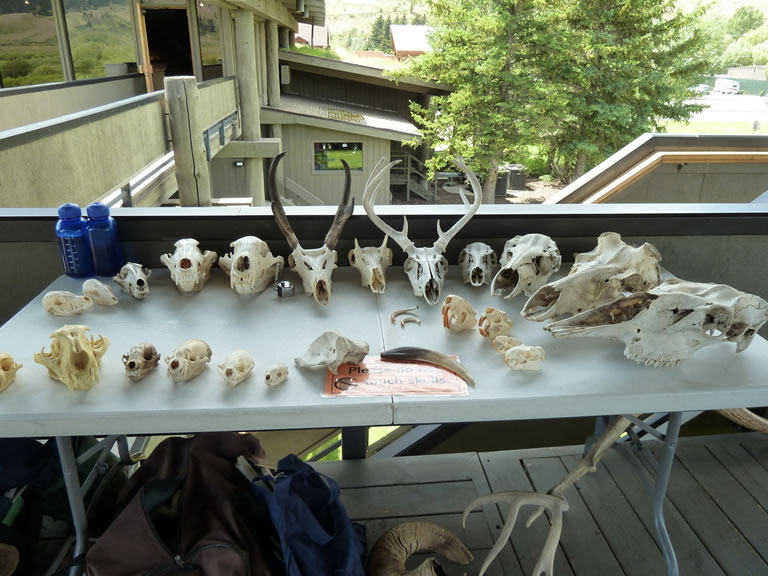 “I just came across a carcass,” my friend Gaylia told me when she called from a trail she was hiking near Grand Teton National Park, “and I’m wondering what it is.”

As she described the large skull with no upper front teeth, I pictured an elk. “But check the length of the nasal bones,” I said, knowing she is a nurse and could identify different bones, “because if they’re short, it could be a moose.”

Skulls and teeth have fascinated me ever since I learned that you can tell a lot about an animal from its teeth and bones. Because they are the only animals with a backbone that can chew their food, mammals in particular are identified by their tooth structure. Different kinds teeth and different numbers of teeth help distinguish between carnivores (meat eaters), herbivores (plant eaters), and omnivores (plant and animal eaters). Reptile teeth, on the other hand, are various degrees of spikes or saw-shapes good for grabbing prey or ripping vegetation which is not chewed, but rather swallowed whole.

Intrigued by these facts, we’ve collected a wide variety of skulls over the past 20 years, including a few reptile skulls. Some have been given to us, some we have purchased, some we’ve found, some are roadkill that we fleshed out in our garage when we had a house. Most are real, some are artificial. But all have proven to be good teaching tools that help explain how an animal eats and why it eats what it does.

Our collection began while we were docents at the Denver Zoo. While hiking in the Pawnee Grasslands in northeastern Colorado, we came across a small jawbone. When no one at the zoo could identify the animal the jawbone came from, we took it to the Museum of Natural History adjacent to the zoo and left it for their inspection.

“It’s the jawbone of a baby camel,” we were told when someone called a few days later, “from 32 million years ago.”

This information encouraged us to sign up for their course in Comparative Osteology which opened up a new understanding of how animals are differentiated and distinguished by individual bones and features. Questions we never thought of were answered by this course, and we have used the information in presentations with our skulls to classrooms, libraries, and RV parks.

What Kind of Skull?

“I’ll take a picture of the skull,” Gaylia told me when she called from the trail. “You might want to come and get it. It looks like good moose habitat.” Because elk are more plentiful in this area, I continued to doubt it could be anything else.

But when Gaylia showed me the picture of the skull with short nasal bones, I was excited to see it was a cow moose. And when Gaylia offered to take me to the spot where the carcass lay, we made plans to hike the following week, inviting others to come with us, including forest service volunteer Suzann Mohr and our daughter Holly who was performing with the Grand Teton Music Festival for a few weeks.

The hike started at the top of Teton Pass and ended up on Trail Creek County Road west of Wilson, WY. “It’s downhill all the way,” Gaylia told me. We left one car at the bottom of the mountain, then drove to the top to begin the hike.

Halfway down the hill, Gaylia stopped. “There it is!” Nestled in the bushes at the side of the trail lay the partial carcass of a cow moose. In my excitement, I nearly forgot to take her picture before extricating her from the shrubs.

Chuck assumed the chore of separating her skull from the rest of the carcass, taking care to retain the first neck vertebra for my collection. The cracking sounds as he twisted the skull to remove it sent chills through some of the hikers. And although it was obvious the carcass had lain there for some time, the rank smell of dried tissue and rotting remains fouled the air.

Awkward and heavy, we finally managed to bag the skull and vertebra, tie the top of the bag, and continue our hike. As I hiked carrying the bag, it snagged on branches, tearing a bit and exposing part of the skull. “It stinks!” Holly observed, rightly so. Because she hiked behind me, she was subject to the full fragrance.

One More for the Collection

But we now have another skull to add to our collection. Although her teeth are worn, indicating an older animal, the cow moose skull is in relatively great shape and includes her lower jaw.  As with all living things, this animal died; but her life will continue to be meaningful for many years as she educates and intrigues those who would otherwise never have had the opportunity to marvel over the complexities and beauty of an animal’s skull.

Before removing skulls and bones from their location, check with local state Game & Fish agencies to learn regulations regarding collection of animal remains in your area. Removing any natural object, plant, or animal from National Parks and National Wildlife Refuges is prohibited.