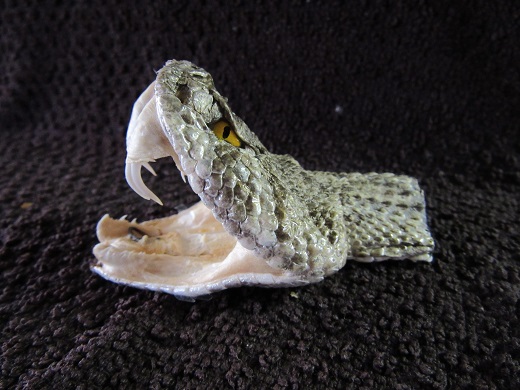 “My father brought the head of a rattlesnake to our classroom one time,” a student once told us. Not knowing why this father presented a venomous snake head to an elementary classroom, we cringed at the thought because a dead rattlesnake can still envenomate a victim.

“If you find a dead snake,” says the American College of Medical Toxicology, “do not come into contact with the snake’s mouth, because dead snakes can still deliver venom through their fangs. Even a severed head of a snake still has the ability to inject venom when it is touched.”

The chemical makeup of venom does not change after the snake is dead and can last quite a while. “Never handle a venomous reptile, even after it’s dead,” says Arizona Poison and Drug Information Center. “Reflex strikes with injected venom can occur for several hours after death.”

Bitten by a Rattlesnake

A friend of ours was once bitten by a rattlesnake in her front yard at night as she walked the brushy area toward her mailbox. When police arrived on the scene, they captured the snake, cut off its head, and threw the head into the garbage can. During the ambulance ride to the hospital, an attendant observed the body of the snake writhing in the pail where it had been placed. “Is it still alive?” she asked. Our friend peered into the bucket and confirmed that the body of the snake was headless. Reflex action left the snake writhing for several hours after its death.

What about the Head?

“It is a known fact,” says rattlesnake researcher Bryon Shipley, “that one of the intriguing physiological oddities about low metabolism animals, such as snakes and other reptiles, is the slowness of the death of tissues such as nerves and brain cells.” Apparently, according to Bryon, decapitation does not result in the death of the brain which may remain capable of controlling eye movement, jaw movement, venom gland compression, and even tongue flicking for an hour.

Decapitation as a method of euthanasia is not recommended without the concurrent destruction of the brain as well. “There is an old saying,” says Bryon, “that ‘rattlesnakes never die until sundown.’ Which exemplifies the slow process of death and the danger of envenomation due to nerve reflex impulses.”

Perhaps the father who brought the rattlesnake head to his son’s classroom thought, as many others think, that “the only good snake is a dead snake.” While we consider rattlesnakes and other snakes to be neither “good” nor “bad,” we realize their value in the ecosystem, as well as their value to the medical community where venom is studied to help cancer, heart, and diabetic patients. And a live rattlesnake has the ability to control the amount, if any, venom that they deliver.

The father, then, might discover some day that the only “good” rattlesnake is a “live” rattlesnake!