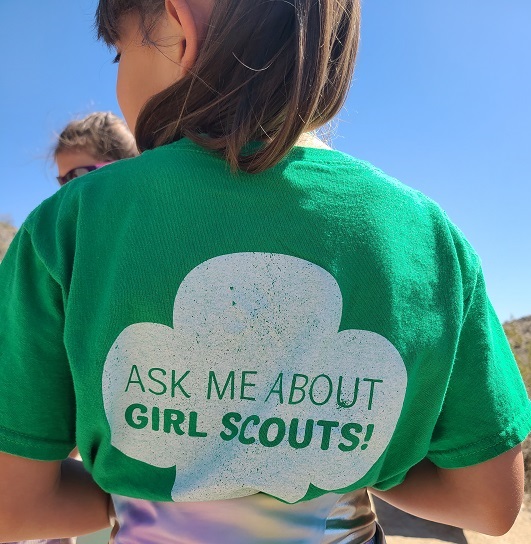 When asked by Ranger Justin at White Tank Mountain Regional Park to lead a group of Girl Scouts on a hike recently, we readily agreed, recalling fondly the school fieldtrips we led at some refuges where we’ve volunteered over the past few years. The theme for this hike, we were told, was “Leave No Trace.”

Preparing for the Hike

The Girl Scout troop arrived on time, spilled out of two vans, and gathered near us. Eleven girls paid close attention as Chuck asked, “Why is it a good idea to stay on the trail?” They answered with obvious reasons, such as getting lost, being poked by cactus, and possibly stepping on a snake. We added that footsteps can damage the delicate desert soil, causing erosion and lessening the ability of the soil to absorb moisture. They agreed they should stay on the trail!

To enhance the theme of the hike, we had brought along a “PikStik” and a couple plastic bags to remove any trash we encountered as we hiked. Their capable leader, Alicia, had already prepared them for the hike by teaching principles of Leave No Trace.

Shortly after hitting the trail, the girls proved their determination by pointing out bits and pieces of trash.  “They have sharp eyes!” I remarked as they meticulously spotted tiny pieces that I had missed.

“Stay on the trail!” Alicia reminded occasionally when one or two girls strayed a bit as they searched for trash, gazed at scenery, or discovered a tiny beetle. But for the most part, the girls stayed behind Chuck, chatted with each other, and reveled in being outdoors.

Chuck had brought his snake tongs in the event that we encountered a reptile, but since we didn’t see one, he only used it to help pick up trash.

As we filled a bag with odd pieces of rubber, tissue paper, a bouquet of colorful fake flowers, and various other “treasures,” we made our way up Waterfall Trail to the “waterfall,” which only displays a fall during a downpour. The girls showed off their agility climbing over boulders and hopping up steps to view the rock wall that periodically displays the namesake of the trail.

A former Girl Scout myself, I was delighted to see that the organization has endured with dedicated leadership, curious and active girls, conservation goals, and activities and programs geared to build strong, independent, and thoughtful women who will one day become leaders and examples themselves.

2 thoughts on “Leave No Trace”