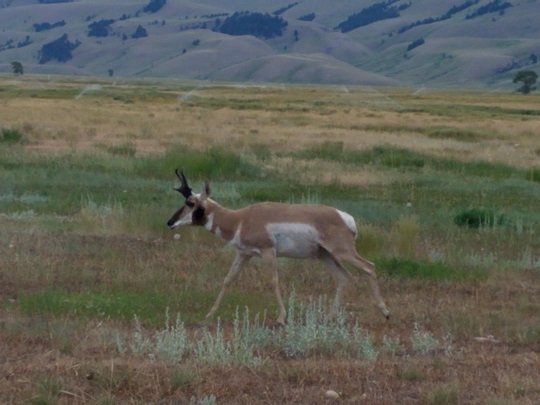 Recently, we encountered some wildlife interactions we’d never before observed, although they likely happen daily.

We’ve often witnessed blackbirds diving at and attacking ravens and hawks in flight to remove them from their territories or nest. In these instances, the larger birds generally appear only slightly bothered, as if buzzed by a mosquito. Recently, however, as we climbed the butte on the National Elk Refuge during our biology workday, we heard the iconic scream of a redtail hawk. Expecting to find it soaring above us as a stately hunter watching below for its next meal, we instead saw the hawk flee from an attacking raven protecting its young on the nearby slope. Having never before seen a large bird diving at another large bird, we were surprised at the aggressiveness of the raven and the hasty escape of the screaming redtail, obviously more threatened by this attack than that of a small blackbird.

While blackbirds diving at a large intruder in flight is a common occurrence, we’d never seen a blackbird attack a large bird on the ground. Later that same day in a wetland habitat, we encountered two Sandhill cranes strolling through the grasses ahead of us, appearing oblivious as they chortled to each other. But their peace was suddenly interrupted when a redwing blackbird dove over their heads, soared around, and began a relentless attack from all directions. The Sandhill cranes flinched and shrugged, but continued their leisurely pace in spite of the nuisance.

But perhaps the most unusual event of the day (for us) happened when a pronghorn doe dashed in front of our vehicle at full speed. We’ve seen wolves chase elk and coyotes dive for ground squirrels, so we assumed this female was running for her life from a predator.

“Wonder what’s chasing her?” I said as we swung our binoculars to view territory behind her. But no predator appeared. Then we returned our binoculars to watch the pronghorn still racing madly off into the distance. Ahead of her, however, we spotted an equally frantic coyote running away, frequently glancing over its shoulder as the mother pronghorn pursued him, obviously to protect her offspring.

While all wildlife encounters are fascinating to watch, the occasional different confrontation adds a measure of excitement like seasoning on an entrée!