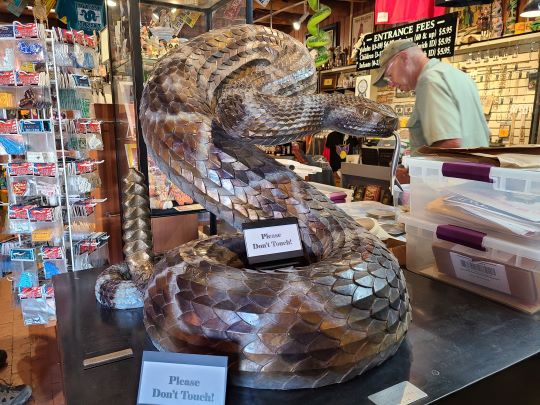 While exploring a remote section of the Sonoran Desert at Imperial National Wildlife Refuge several years ago, I halted at the sound of a rattle and searched for its owner. Chuck was exploring a ways away, and when I spotted the diamondback, I called him over. The snake was coiled near a creosote bush, rattle pointing up from its coils. “Isn’t he beautiful?” I remarked when Chuck arrived.

At one time I feared snakes, especially rattlesnakes, and would not have known what to do if I encountered one. But after years of volunteering with the Denver Zoo and U.S. Fish & Wildlife, I learned about snakes and began to appreciate their needs, their uniqueness, their impact in the wild.

It’s always exciting to see a rattlesnake in the wild. But where can you go to see them closeup, learn about them, and view the many different species of rattlesnakes?

Albuquerque, New Mexico, is home to a museum mostly devoted to rattlesnakes. The American International Rattlesnake Museum must be doing something right judging from the numerous visitors the day we visited. With the most diverse collection of rattlesnakes in the world, this museum exists to educate visitors about this much maligned species, as well as helping people overcome their fears and dispel snake myths.

However, the Rattlesnake Museum also promotes itself as “an animal conservation museum.” This fact engaged me the most; and while Chuck peered into snake habitats, I focused on some conservation messages. One of the most important messages, I felt, was a display of “Save the Bees.” Since bees are another misunderstood species necessary to a healthy environment, this fit well with the message concerning rattlesnakes. Both species are important in the ecosystem, both species are exterminated on a whim, and both species are on the decline.

Owned and operated by Bob Myers, The Rattlesnake Museum has been in operation since 1990. “I always had an interest in reptiles since I was a little guy,” says Bob.

The message Bob presents regarding conservation and preservation of reviled species is an important part of educating the public and promoting respect and understanding of where and how these creatures fit in. Education is the key to restoring natural habitats, as well as the key to encouraging people to appreciate and protect the balance of nature. Whether or not someone dislikes or fears a species, armed with education, they will likely help to safeguard its existence.

Before creating the Museum, Bob taught high school biology for six years. When asked why he gave up teaching to pursue a life with rattlesnakes, Bob has a ready answer. “Teaching was too dangerous!”

6 thoughts on “A Museum for Rattlesnakes?”