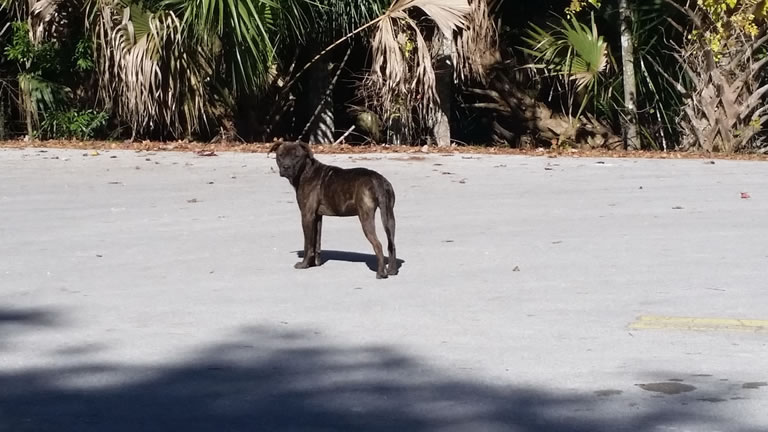 Stray dogs have no place on a wildlife refuge. So when I encountered an emaciated pit bull in the parking lot of the Florida wildlife refuge we currently are working with, I asked other visitors if it was their dog, guessing that it probably wasn’t.

One visitor, however, had fed the dog a piece of toast, and the dog remained in the parking lot searching for more food. “I think I’ve got a granola bar, too,” she said and rummaged through her car to come up with a peanut butter bar. She tossed it to the dog who scarfed it down as if competition breathed over his shoulder.

When the woman agreed, I drove back to refuge headquarters to ask the set of volunteers who owned a dog if I could borrow a leash to try to capture the pit bull. Since our trailer was nearby, I also secured a chocolate granola bar for bait – the only food I had handy. Then I drove back to the parking lot on the refuge. In the meantime, Chuck called animal control.

Because the dog had no collar, I looped the leash like a lasso in hopes of slipping it over his head. I held the granola bar toward the woman who had kept an eye on the dog and asked if she would help.

“You’re just going to send him to a kill shelter,” she said. “I won’t have any part in that!”

“A dog has no place on a wildlife refuge,” I told her. “He’ll harass and kill wildlife. And he can likely die of starvation, get hit by a car, or be eaten by an alligator.”

“I believe in letting nature takes its course!”

“That’s not nature!” I told her. “Dogs don’t belong on a refuge – it’s an introduced species. The mission of a wildlife refuge is ‘Wildlife First.’”

“But I wouldn’t want him killed at a shelter!” 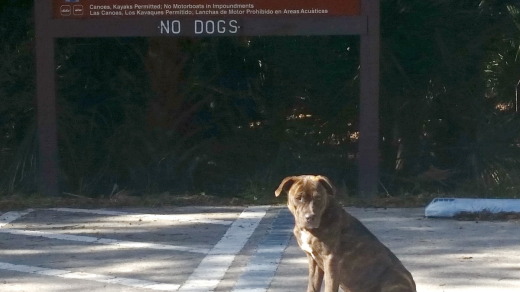 I understood that this woman felt conflict in her love for animals, but she held fast to her belief.

Finally, I tossed a piece of the granola bar in the dog’s direction. He approached cautiously and ate the morsel, all the while eyeing the leash in my other hand.

“Does that bar have chocolate in it?” the woman demanded.

“I know chocolate is not good for dogs,” I said, “but it’s all I had and the sooner the dog is removed from the refuge, the better for the wildlife.” And for the dog, I thought, but kept that to myself.

As another couple emerged from their car, the dog turned and growled at them. Definitely not a friendly dog, I realized and decided to abandon further efforts to capture him. Animal Control would have to chase him down.

“I’m going to the store to get food for him,” the woman said.

The woman’s intentions were admirable, I thought, but they were not good for wildlife.

Animal control arrived later in the morning, spoke soothingly to the dog, and offered it canned dog food. As the dog ate, the officer slipped a loop over its head and wrapped the leash around its muzzle, all the while petting the dog and speaking to it before lifting it into the truck.