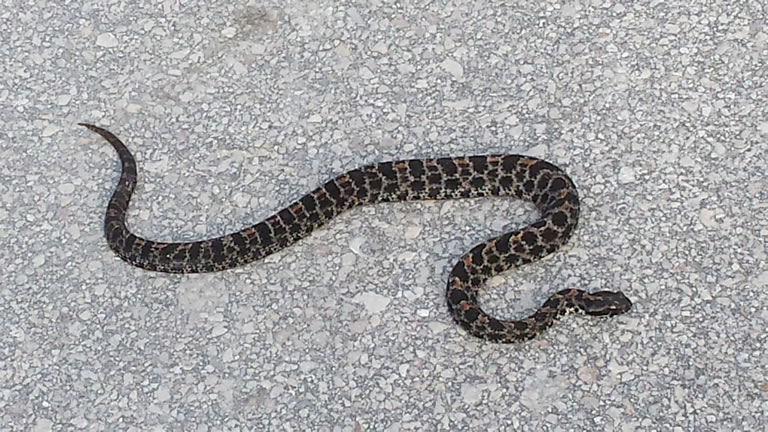 I’ve always heard that the rainforest is not as dense within its boundaries as it is on the edges where vegetation receives more sunlight. We were able to witness this recently when we accompanied Dr. Terry Farrell (biology professor at Stetson University) and two graduate students, Sarah Smiley and Ethan Royal, as they thrust through the edges of a hammock on Lake Woodruff National Wildlife Refuge near DeLeon Springs, Florida, in search of pigmy rattlesnakes.

A hammock, I learned recently, is a group of trees surrounded by a marsh, and when water levels rise, the hammock may become flooded. Dr. Farrell pointed out water marks a foot or more up the tree trunks. “High water is actually nice because it pushes the snakes up,” he said.

Because I am not a fan of spiders – and Florida supports some impressive species – I followed closely behind Dr. Farrell to avoid becoming tangled in webs. The others, including Chuck, spread out, snake hooks and collecting buckets in hand, inspecting fallen palm fronds and leaf clusters looking for telltale dark circles that indicated tightly coiled pigmy rattlesnakes.

We knew for some time that Dr. Farrell is well versed on and maintains an interest in the pigmy rattlesnake, and we had hoped to connect with him while we volunteered at Lake Woodruff NWR over the winter. According to Dr. Farrell’s biography on Stetson’s website, “After becoming a faculty member of Stetson in 1989, he spent much of the next two decades studying pigmy rattlesnakes and box turtles at Lake Woodruff National Wildlife Refuge with Peter May and a dedicated group of Stetson University students.”

As I followed Dr. Farrell through the hammock, he shared natural history tidbits of the area and answered my myriad questions, such as, “Is the interior of the hammock always this sparse or is it because of the prescribed burn?”

Vegetation in the hammock had regrown since the burn, but open areas allowed us to navigate fairly easily through the brush. “It’s probably less dense if they don’t burn,” said Dr. Farrell, “because the trees retain the nutrients.” Burning releases nutrients and makes them more available to other vegetation.

While searching for the pigmy rattlesnake, we encountered a box turtle that had previously been captured and marked for study. Dr. Farrell pointed to the holes drilled into the turtle’s scutes, placed strategically to identify the animal for future study. Farther on, as I stumbled over fallen tree branches and pushed aside palm fronds, I discovered the shell of a turtle, green with age that indicated it had died some time ago. This shell, however, had no holes drilled in it.

Dr. Farrell spotted and captured a tiny Leopard frog. “Perfect pigmy food,” he said, holding it toward us for our inspection. “That’s why there’s an abundance of pigmy rattlesnakes here because of abundance of frogs. There’s good frog diversity here.” Pigmys also eat ribbon snakes, centipedes, and an occasional bird.

Skirting poison ivy and slapping at mosquitoes, I continued following Dr. Farrell as he discussed the natural history of the pigmy rattlesnake. “They almost never strike if they’re poked when coiled,” he said, specifying that he dons thick gloves before that experiment. “But when you find them stretched out on the road, their behavior is different.”

His description of head jerking matched what I had witnessed when driving back from the Refuge a few days earlier. On the road in front of me, a stretched-out pigmy rattlesnake laid perfectly still while I snapped several pictures. But when it finally noticed my presence, its head jerked back and forth toward me in a threatening behavior before bolting for cover. It’s their attempt, according to Dr. Farrell, to say “I’m bad!”

The researchers expect to find a pigmy rattlesnake for every 1 ½ observer hours. Sarah is working on her doctorate studying how venom relates to predator/prey interactions. Ethan searched for snakes to video their reactions to a prey species.

Although pigmy rattlesnakes are plentiful in this area, our search failed to locate any. “We’ll be going out at other times,” said Dr. Farrell, “hopefully when the snakes are more cooperative. We’ll be in touch.”

We’ll look forward to it!

2 thoughts on “Searching for Pigmies”