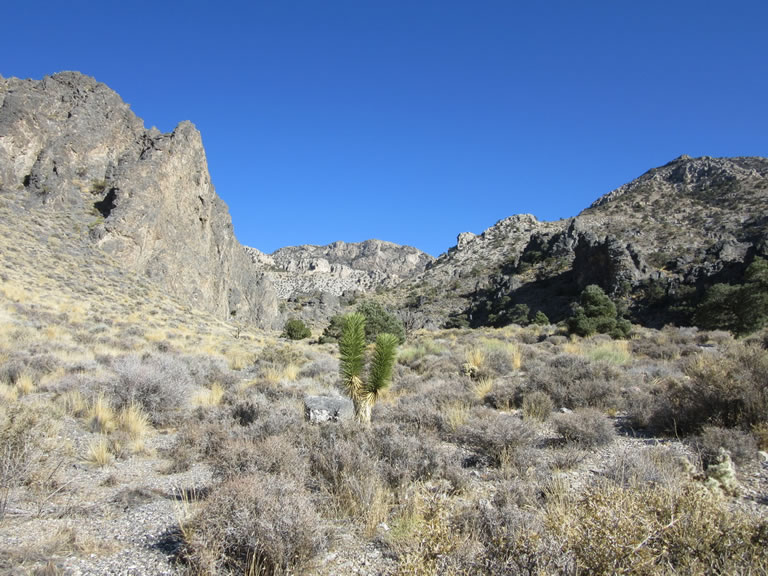 On Thanksgiving morning we drove into Desert National Wildlife Refuge to hike a trail up a wash into rugged, mountainous terrain. We encountered no one else all day on this remote refuge, but we did stumble upon evidence of human activity.

At the first area we stopped on the way to our trail head, we spent an hour picking up shell casings from .223s, .22s, .45s, 9mm, .38s, .44 magnums, 380s & shotguns. We filled a doubled Walmart bag that nearly burst from the volume. Undoubtedly, we could have filled another sack or two if we’d had more of them. But our only other container was a large kitchen bag which we filled with broken glass, cans, and boxes that had been used as targets. Our second stop was less dramatic, but still littered with more shell casings, broken glass and debris.

Once alone on the trail, however, we saw no trash or signs of people other than a few footprints. We hiked to the entrance of a canyon where we sat on a couple small boulders to eat our peanut butter sandwiches – one of the best Thanksgiving meals ever! A small herd of bighorn sheep wandered by.

As we ate, we grumbled about some people who have no consideration for wildlife or its habitat. But it was Thanksgiving, and we realized finally that there are a lot of people who do the right thing, and we should be thankful for them. After all, hikers on this trail before us either did not litter or they picked up any litter they encountered and took it with them. And in the visitor center we’ve met lots of people who are concerned with the future of conservation, climate change, funding for wildlife, and any number of other issues.

One such person was a six-year-old girl who approached the information desk one day and held out a tiny twig shaped like a miniature slingshot. “Look what I found!” she exclaimed proudly as I admired her treasure.

“What are you going to ask?” her father said.

The little girl thought for a moment before asking me, “Can I keep it?”

Normally, everything found on a wildlife refuge stays on the wildlife refuge. That includes the plants, the animals, the rocks, and even twigs. It was obvious that her father knew the rules and had advised her to ask before taking it home. “Well,” I said as the youngster watched me with bright eyes, “since you are a budding scientist, I think it’s important for you to take that home with you.”

The little girl smiled and proceeded to tell me about all the exciting things she had seen and done this day. There’s hope for the future! I thought. And her father was teaching her respect for the environment.

Another incident that reminded us of the goodness in humanity that we should be thankful for involved Juan, a carpet specialist. Desert NWR’s manager, Amy Sprunger, had asked Juan to come to the refuge to give her an estimate for stretching the carpets in the refuge bunkhouse. Considering that it’s a long drive to the refuge from wherever a person begins, Juan expended at least a couple hours in this effort. After measuring, he told Amy the job would cost around $200. Amy agreed and made an appointment for him to come another day to do the work.

When Juan returned on the appointed day, it took him two hours to stretch the carpet in the bunkhouse. When finished, he approached Amy to tell her. “Great,” said Amy. “How much do I owe you?”

“Nothing,” said Juan. “I do this for the wildlife.”

Surprised, Amy shook her head. “No. You can’t do that for free!”

These incidents are just two of the many that we considered as we sat on those rocks on Thanksgiving Day. We have much to be thankful for; for the most part humanity cares and ultimately does the right thing.

6 thoughts on “Giving Thanks”