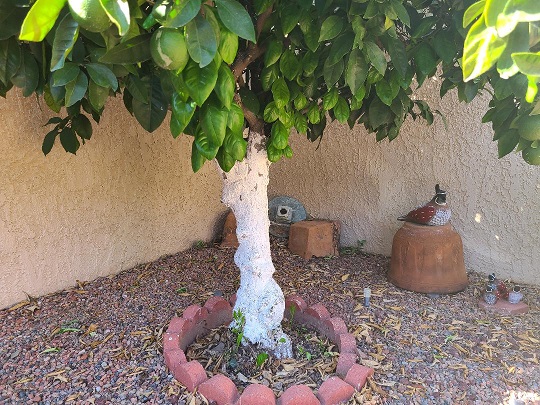 We’ve lived in our Arizona condo for nearly four years now. And since the beginning, we have tried to create a habitat in our patio area that would entice lizards to take up residency.

At first, we stacked broken ceramic pieces, piles of rocks, and skeletons of cholla cactus in a corner of the wall behind our orange tree to establish a “hide” for them. Then we sank a couple pie plates into the ground and extended a water line to fill them. Lastly, we bought a bag of crickets and released them into the yard for food.

And…….. none came. And the crickets escaped.

So we set up a couple bird feeders and a bird bath to at least attract some sort of wildlife. Gold finches, white-crowned sparrows, Gila woodpeckers, mourning doves, white winged doves, hummingbirds, and assorted other birds then flocked into the patio area, sometimes squabbling over preferred space on the feeders. And just this past spring, a pair of Gambel’s quail set up housekeeping in the corner that we had designed for lizards. In a few weeks, they produced a dozen young and remained in the safety of the patio for several days before venturing out into the world.

However, on our nightly walks in the neighborhood, we’ve lately spotted Woodhouse’s toads sitting on the sidewalk, some apparently asleep as they resist when we urge them to a safer location. One evening, after encountering several small toads, likely newly hatched, we captured two and released them into our patio with very little hope that they wouldn’t escape.

But two days later, Chuck announced, “I saw them both hopping around the patio this morning!” And since then, we have seen at least one of them several different mornings. Just this morning, as we drank coffee on the patio and the finches argued over their spot on a feeder and doves pecked at leftovers on the ground and a Gila woodpecker stole juice from the hummingbird feeder, I thought I noticed something hop once on the ground. I crept close to have a look. “It’s one of our toads!” I told Chuck. 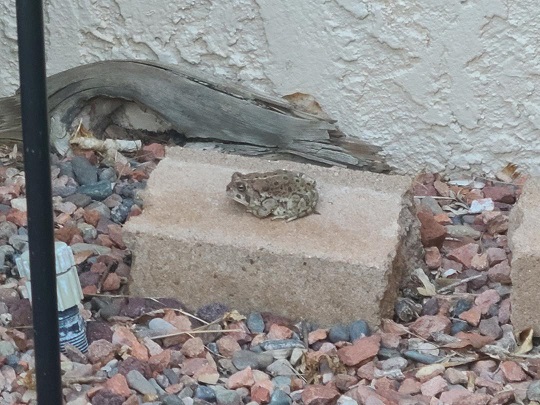 So, while we have had no luck attracting a reptile, we have settled for whatever wildlife is willing to take advantage of our hospitality. But we’d still welcome a lizard or two!

4 thoughts on “Habitat for Lizards”