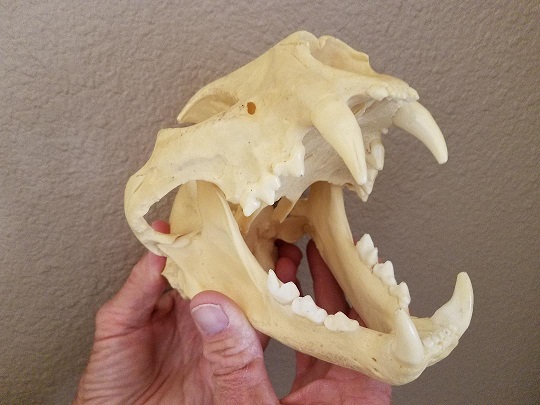 We often take our snakes and skulls to White Tank Mountain Regional Park and set up a table to interact with and educate visitors about the fauna that inhabits the park. Of all the skulls we display, only three are replicas, and the mountain lion is one of those. I use that skull to attract children and teach them how to attach the jaw to the skull and then open and close it. “It’s like using a pair of scissors,” I tell them after pointing out the sharp teeth lining the back of the mouth.

Recently, after working with some kids with this skull, as I turned to put it back on the table, I came face-to-muzzle with a large German shepherd. Since he appeared interested in what I had in my hands, I held the skull down a bit for him to investigate.  As he approached closer, I opened the jaw and exposed the mouth full of teeth.

Immediately, the shepherd reared back, eyes bulging with fear, tail lowered, trembling as he backed away, finally disappearing behind his owner and then peeking back around to see if the coast was clear.

Since that first episode, I’ve tried this with other dogs, but now only after asking permission from their owners. Small dogs seem unconcerned when faced with this scary predator, and most stick their nose into skull’s open jaws to examine it. Many big dogs, however, cower and react much the same as that German shepherd.

While this obviously is far from a scientific observation, I wonder if big dogs are more aware of the danger of such a predator or if they are merely more anxious than smaller dogs that often seem bold and fearless.  We’ll never know, but we can be assured that some dogs, like some people, are more sensitive to danger than others.