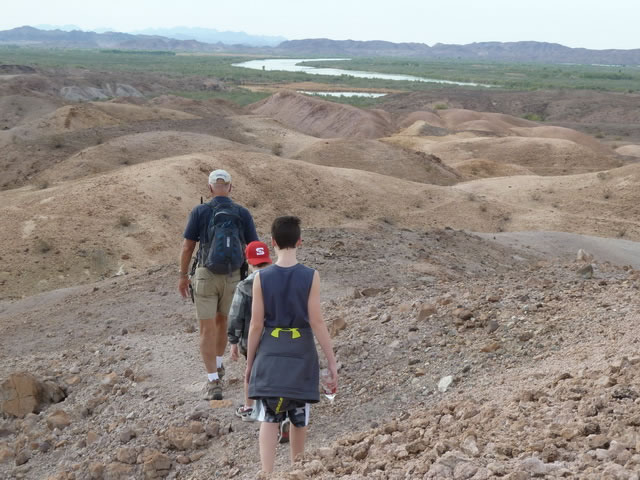 Reports show that kids these days don’t get outdoors enough and explore nature.  So when we were asked recently to take two boys on a hike in the remote desert, we were glad to oblige. Terry and Diane Moilanen, whom we met through our Wednesday interpretive hikes at Imperial National Wildlife Refuge, host their grandsons each year in Yuma, Arizona, during spring break.  Last year, we led Spencer, now 13, Trevor, now 9, and their grandparents on a personalized hike over the trail we normally take winter visitors on.  This season, we introduced them to our special place that few others know about.  We call it the Vista Trail for the wonderful views of the Colorado River as we hike up a remote wash and climb the steep slope at the end that leads to a high narrow ridge overlooking what appears to be a mini Grand Canyon.

Our hikes by ourselves are generally focused on searching for snakes.  Even though Spencer and Trevor are not snake enthusiasts, they listened as Chuck instructed them to be careful where they put their hands and feet, as well as what to do if they come across a rattlesnake.  “Just st op,” he said.  “Snakes have poor eyesight, and you can make yourself go invisible if you just stop.  Then take a few steps back.”

Spencer appeared more interested in the vistas and terrain.  It was obvious that both boys had acquired an appreciation of nature from their grandparents, and despite accounts that kids these days are lazy, out-of-shape techies, these boys proved up to the challenge of the hike.  Neither grumbled during the three hours we traipsed up and over desert terrain, enduring increasing late March heat and blazing sun.

And perhaps because of the heat, we saw no wildlife.  “Let’s go back to the visitor center and feed the snakes,” Chuck said, leading the way back to the cars.  We drove the six miles back down the dirt road to the visitor center where we led the boys to the video corner to show them a video we made several years ago while volunteering at the Denver Zoo.  The video shows four different snakes being fed a rat, rabbit, or mouse.

Still not enamored over snakes, Spencer declined the opportunity to feed one of our snakes after watching the video.  But Trevor overcame his revulsion and gave it a try after observing Chuck offer a mouse on the end of hemostats to our hognose, Roggen.  Roggen always takes his mouse sideways or backwards, unlike most snakes who prefer eating their rodent head first to help it slide down more easily.

Chuck attached another mouse to the hemostats and handed it to Trevor.  Handling it like a pro, Trevor offered the rodent to our gartersnake, Karma, who gently (even lady-like) latched on and began devouring.  Trevor then decided to feed Hatch, the bullsnake.

In the Feeding Mode

“She hits it like a freight train!” we warned him.  But Trevor casually accepted the challenge and extended a large mouse on the end of hemostats through a narrow opening that Chuck had created by sliding the glass front of the cage aside an inch.  A five-foot long, thick-bodied bullsnake (also called gophersnake) like Hatch can be quite aggressive when in a feeding mode, and the less striking room she has, the safer it is for us.

Trevor wiggled the mouse as instructed to lure Hatch into thinking it was alive.  Tongue flicking, eyes riveted, Hatch pounced on the mouse and whipped her body around it to “kill” it before consuming it by stretching the ligaments in the corners of her mouth and separating her lower jaw all in an effort to extend her mouth around a piece of food larger than her normal gape.

“How about a mouse for lunch?” I asked Trevor and Spencer as our snakes gulped down their weekly meal.  They both cringed at the thought! We hope to see Spencer and Trevor again for a hike.  It’s exciting for us to share our love of nature with them, but it’s also exhilarating to be in the company of bright, active youngsters and their caring grandparents.