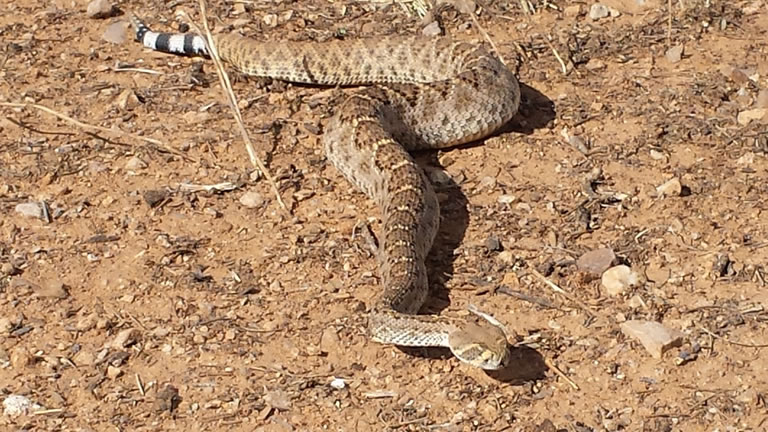 “Will it bite?” kids often ask us regarding our snakes when we present our reptile program at schools.

Both Chuck and I have been bitten by nonvenomous snakes, and it was most often our own fault, either reaching into their cage with fingers that are scented with mice or startling a sleeping snake without first allowing it to wake up. And we’ve had two friends who have been bitten by rattlesnakes, each one declaring that it was their own inattentiveness that caused the interaction.

When asked why people fear snakes, children offer a variety of answers. “It looks funny.” “I’ve seen scary movies about snakes.” “My daddy is scared of snakes.” “They’re slimy.” “They’re poisonous.” “They bite.” While some of the answers demonstrate misconceptions, others are common myths or anxieties. Of all the reasons offered, the main reason people generally fear snakes is because they can bite.

Of course, a bite from a venomous snake can be painful and even fatal; and in the minds of many people all snakes are venomous, even though in reality the great majority are nonvenomous. According to the University of Florida Department of Wildlife Ecology and Conservation, “The chances of dying from a venomous snakebite in the United States is nearly zero because we have available high-quality medical care in this country.” Out of 7-8,000 venomous snakebites each year, only one in 50 million people will die from a snakebite (5-6 fatalities per year). “You are nine times more likely to die from being struck by lightning than to die of a venomous snakebite.”

When children ask if our snakes will bite, we answer, “Anything with a mouth can bite, including a puppy or a kitten. But if you don’t threaten or harm it and you leave it alone, it’s not likely to bite.”

Bites from other animals can be serious as well. According to dogsbite.org, 10-20 people die every year as a result of dog bites in the United States. Dog bites are one of the leading reasons people visit hospital emergency rooms.

“I almost lost my thumb to a snapping turtle when I was a teenager,” Chuck remembers. “I was picking it up wrong and its head flipped over the back of its shell and barely missed my thumb!”

The worst bite I’ve endured came from a squirrel. Excited to see the first squirrel in our new neighborhood years ago, I offered it a peanut. Instead of focusing on the peanut, it focused on my thumb and chomped down as if retrieving peanuts in a shell. I have since learned not to feed wildlife for their sake as well as mine!

And a friend of ours suffered an injury to her wrist when she tried to rescue her cat that was interacting with a garter snake. “I hate snakes,” says our friend, “so I picked up the cat instead. The minute I turned and she couldn’t see the snake, she flipped and bit my wrist.” Although no muscle was damaged, the cat bite punctured down to the bone. And although the wound was cleaned at the Emergency Room, it became severely infected. Our friend had to wear a half cast and keep her arm elevated for 72 hours. She then had to wear a wrist brace for some time afterwards. “My wrist still gives me problems three years later,” she says. “I don’t blame the cat. She was just following instincts and had never seen a snake before.”

So, while snake bites can be serious, so can bites from other animals. Probably the main reason people fear snakes, then, is because they look and act so different from what we consider acceptable.