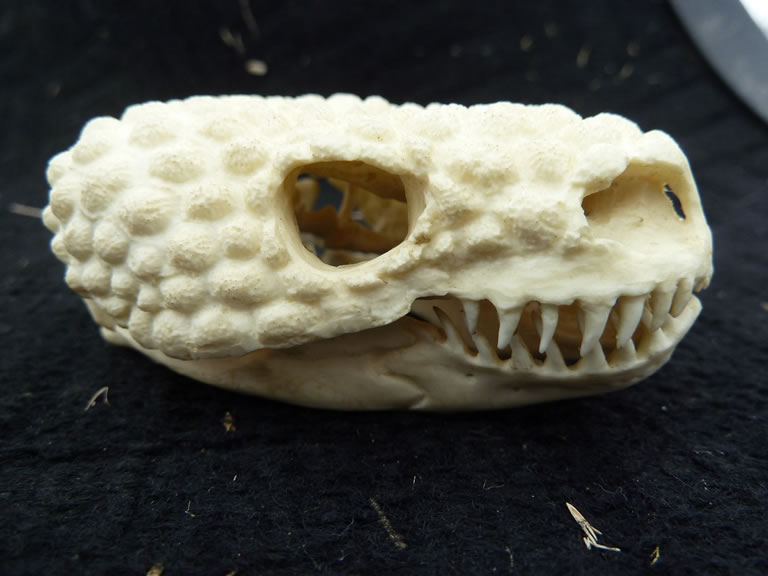 Is a Gila monster a monitor lizard? This question was posed to me recently when we worked at a festival with our snakes and skulls. “No, they’re not monitors,” I told the visitor who had been inspecting the Gila monster skull. “Monitor lizards are defined by their forked tongues.”

Because I hadn’t really studied up on Gila monsters, I later questioned my answer and researched more on these lizards. According to what I read, although Gila monsters appear related to monitor lizards, their unique features better place them in a family of their own; however, a photo of one of the Gilas showed a protruding forked tongue. And I had led our visitor to believe that this lizard’s tongue was not forked.

Dispensing wrong information is something we work hard to prevent. If a visitor later discovers an error, he or she will question any other information that we have presented. But even though we have become experts at saying “I don’t know” when we are unsure of our facts, we can occasionally slip up.

But we’re not the only ones.

During a visit to a natural history museum in a fairly large metro area a few years ago, I was delighted to see that they displayed a skull collection inside a glass case. Because I enjoy talking with visitors about my skull display, I was intrigued to examine what this museum had to offer.

As I scanned the various specimens, my eyes rested on one small skull labeled “raccoon.” I stooped lower for a better view of the teeth, then peered again on my tiptoes to view it from above. “That’s not a raccoon,” I finally told Chuck who was checking out another exhibit. “That’s a red fox!” After discovering that this museum has mislabeled this species, we left wondering how many other mistakes had gone unnoticed as we had wandered through their halls.

On another occasion while perusing the touch table at a state park, I came across a rodent skull labeled “beaver” when in reality is was actually a porcupine. Among other misinformation we’ve encountered is a naturalist referring to pronghorn as part of the deer family and a park ranger telling visitors that the horn on a pronghorn is half antler and half horn. We’ve also listened to a zoo instructor telling docent trainees that the mountain lion is the largest cat in North America. “What about the jaguar?” I asked and was then told that the Jaguar occurs in Mexico. As I recall, Mexico is in North America!

And who hasn’t researched a subject in three different sources and come up with three conflicting answers?

While it is discouraging to relate and receive wrong information, it is also inevitable. For several years, while Chuck and I led hikes in a remote section of the Sonoran Desert with winter visitors, I referred to cactus spines as “thorns.” Finally realizing that all the references to cacti labeled the pointy things as “spines,” I researched the difference and discovered that thorns are an extension of a branch while spines are modified leaves. How many people had I misled?

No park ranger, naturalist, docent, or other wildlife person purposely delivers misinformation. It happens when we don’t know enough about a subject, but we think we do. As everyone else, we are constantly learning throughout life and strive to deliver well-researched facts and material. Hopefully visitors and others will not judge the whole presentation on one inaccuracy.