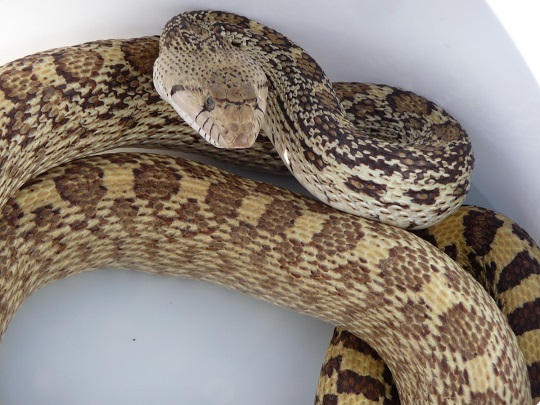 When and how do people develop a fear of snakes? Often these fears begin in childhood, whether experiencing one’s own frightening incidents or adopting a parent’s fear. We have even perused a children’s reptile book with pictures demonstrating snakes attacking an unwary adult or lurking in wait with scowling menace for innocent victims. Rather than educating, the false drawings in this book would likely frighten a child.

For many adults, however, fear originated as someone else’s joke, such as the principal we met once when we presented our program at her school.

“When I was a little girl, about five,” she told us, “my chore was to retrieve the mail from the mailbox that was taller than I was. So I had to stand on my tiptoes and reach way into the box without being able to see into it. One day, my older brothers stuffed the mailbox full of garter snakes, so when I reached in, all I felt were squirmy critters. Ever since, I’ve been terrified of snakes!” That would do it, we felt.

A Day at the Zoo

An incident I observed at the Denver Zoo in the reptile building where I was volunteering as an interpreter in the venomous snake exhibit also began as a joke. As a huge western diamondback was working its way up the glass at the front of the exhibit, a father picked up his young son and stuffed him close to the glass, eye-to-eye with the snake, all the while laughing as the child screamed in terror. I have no doubt that the boy, who must be in his 30s by now, is still paranoid about snakes.

But perhaps one of the saddest stories came to us in a stack of letters from middle school students who had attended one of our reptile programs. One girl wrote in her letter, “I enjoyed every part of your presentation. It was wonderful. When you came, I learned that snakes will do no harm if you do no harm to them.” We were gratified to read this letter and considered the program a success. But then she continued. “When you offered to touch the snake, I didn’t choose to. When I was six years old, my grandpa put a dead snake on me as I was asleep.  After then, I’ve never wanted to touch a snake again, dead, dry, or scaly.”

Jokes have their place, but not when they influence the behavior and anxieties of a child. Children should be taught to respect wildlife, not fear it.

6 thoughts on “Fear Not”