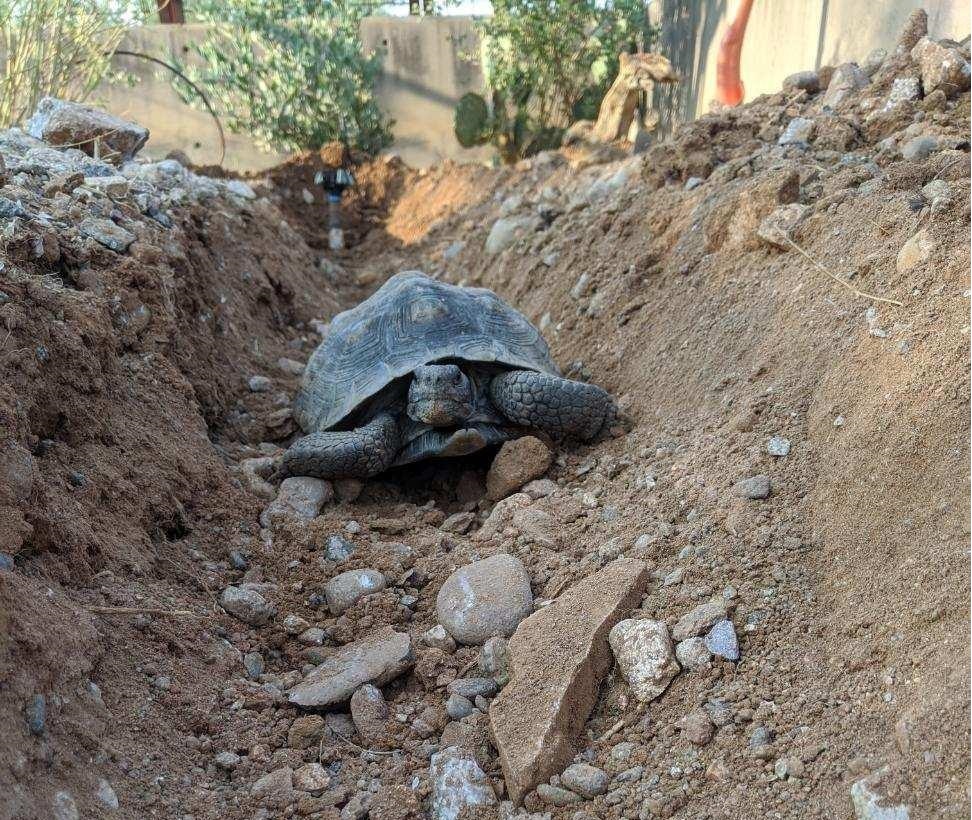 Searching for activities to occupy us while sequestered in our home during the pandemic, Chuck and I decided to remodel our kitchen. In reality, all that entailed for us was adding handles to the cabinets and drawers. For $30 and a little time, what a difference that made!

But that wasn’t the only remodel job we became involved with during this period. Ranger Justin at White Tank Mountain Regional Park asked if we were interested in helping improve the desert tortoise exhibit. “Of course!” we said without even knowing the specifics.

We followed Justin to the exhibit so he could show us what was needed. Once inside, Justin marked a line in the dirt from an irrigation control valve to the far end of the enclosure. “We need a trench dug here to accommodate a water line,” he said.  Piece of cake, we thought. To soften the ground in preparation for the great dig, Justin said he would soak the area the day before we planned to work.

A couple mornings later, we arrived before 6:30 to complete the work before the heat of the day set in.  Justin had laid out a pick ax and a shovel for us to use, prompting us to think that the job might involve a little more effort than we had believed. But we could tell that the ground had been watered recently so that it would be softer for digging.

Cera, the desert tortoise who occupies the exhibit, huddled at the far corner of the enclosure when we entered. Cera is often joined by a variety of birds, including roadrunners, as well as bees, lizards, snakes, and a few other critters that can squeeze through the exhibit fencing and share his water supply. Once he spotted us, however, he ambled our way to check us out. He seems to enjoy human company, or perhaps he’s merely curious. We greeted him, then ignored him as we dragged the pick ax along the path that Justin had indicated for us to dig, marking more clearly where we should run the trench.

Chuck took the shovel, while I wielded the pick ax.  Shouldn’t take long, we thought, until we discovered that the ground was still fairly hard, as well as filled with rocks. “I’ll break it up with the ax,” I told Chuck, “and you can follow with the shovel.” An hour later, we hadn’t made much progress. The trench was almost long enough, but not yet deep enough.

But then Justin arrived at work and joined us to help. “You’ve already done the hard part,” he told us, but we knew that we could never have completed the job without his hard work!

Cera continued to supervise our efforts. He will reap the benefits of this remodel after Justin plants Bermuda grass that will be watered with the extra valve. “The restoration will increase the overall food supply since there’s not enough forage in the exhibit right now,” said Justin, who will also feed Cera collards, bell peppers, carrots, romaine, and dandelion greens.  “Bermuda grass should make up the primary part of his diet.”

All creatures deserve to have their homes spruced up and improved occasionally.  We’re looking forward to seeing if Cera approves of his remodeled habitat when the grass begins to grow!

Thanks to Ranger Justin at White Tank Mountain Regional Park for our featured photo!