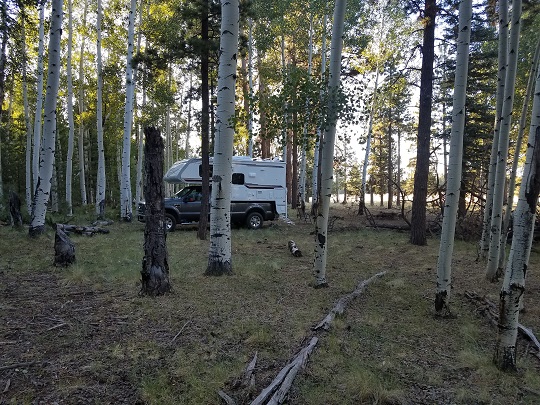 Recently, we headed to northeastern Arizona in our new truck camper and spent a couple nights to escape the Phoenix oven and engage in a little “social distancing.” More than seeking cooler temperatures and reveling in nature, this was a shakedown cruise to test our recollection of living off the grid with solar energy and propane. For washing dishes and our bodies, we even brought along two solar bags that heated water to scorching temperatures merely by laying in a sunny area.

The remote campsite we pulled into on National Forest land showed evidence of previous occupants. A fire ring constructed of large rocks that could almost be called boulders marked  the entrance to the site. An elk humerus lay across the two-track road, not far from the elk’s scapula, both bones bleached white from the sun. Hunters had obviously had success here and perhaps even cooked some of the elk meat over the fire.

Surprisingly, with this evidence of use, the campsite and surrounding areas appeared free of trash. Not even a bottle cap or zip tie or dental flosser lay in the dirt. Since this is not always the case, we suspected that a previous occupant had cleaned up their trash and any other trash they found before leaving. And they had done a spectacular job, it seemed.

A short walk from the campsite produced trash that few campers could have removed. For here we discovered an old water heater shot full of shotgun blasts, a rusted oil drum squashed nearby, and the ubiquitous beer can. What a lot of effort someone went to in order to have a target to shoot at! And, in contrast to the hunter/camper who had cleaned up around the area, these campers/hunters (there had to be more than one) soiled the earth and disrespected future campers.

We have talked with numerous hunters over the years as we volunteered at National Wildlife Refuges throughout the country. The vast majority seemed responsible and appreciative with comments such as, “I never shoot a trophy animal” and “If I wound an animal, I always track it down so it doesn’t suffer” and “I hunt just for food so that I know where my meat comes from.” A few hunters have even said that they take a moment to thank the animal that gave its life so the hunter would have food in the freezer and on the table.

The sole hunter that I recall who did not fit into this mold had a different take. “Do you hunt?” I asked him since he appeared to have knowledge of animals. “I don’t hunt,” he snarled. “I kill!”

As with anything else, a few detract from those who are honorable and conscientious. Chuck and I own guns, but we have never hunted. We’re too lazy and it takes a lot of work, not to mention money! But we realize that hunters give more dollars toward wildlife conservation than any other group through their fees and taxes from hunting tags they are required to obtain and equipment they need to buy. Without hunting (not poaching!), fewer funds would be available to maintain habitats and provide education.

Regardless, we enjoyed our stay in the forest that night.  In the morning, we awoke to elk grazing in the nearby meadow behind our camper. Sitting outside with our morning coffee and watching the herd, we silently gave thanks to those who care for and protect public lands and their inhabitants.