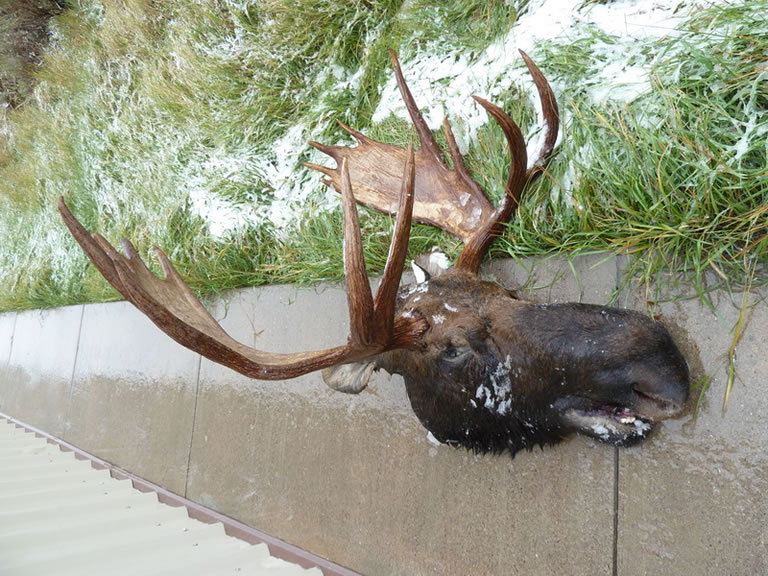 “Do you want to see the moose head?”

A fellow volunteer escorted Chuck and I out behind the workshop of the National Elk Refuge to see the head of a large bull moose, complete with enormous rack, that had been removed from a carcass earlier that day. The moose had been gored by a fellow bull in rut and died in an isolated area on the Refuge. Plans for the skull are to clean it and use it for education.

“Did they get the first neck vertebra?” I asked, thinking I’d like to add it to my collection of first cervical vertebrae. But the answer was no.

The following day, after Chuck was given GPS coordinates to locate the carcass, we drove to the site after we finished our work for the day. As we hiked a half mile following the GPS indicators, a coyote scampered off in front of us. Crows and ravens fluttered onto tree branches. “We must be close,” I said.

When we located the carcass nearby, magpies still worked on opened tissues. The carcass itself was remarkably intact, except for the missing head. Loose hair scattered across the ground indicated predators had been at work. The closer we came to it, the stronger the whiff of decaying tissues. We were lucky it was a cold day!

For some reason, with the head missing and the other end opened by bird activity, at first we could barely distinguish front from back. Because the neck was much shorter than I would have thought, I feared the first few neck vertebrae were missing. I poked into the neck cavity with a stick. Muscles, tendons, and ligaments obscured my view. “I think it’s there,” I said, “but it’s hard to tell.”

As coyotes yipped in the distance, Chuck donned a pair of rubber gloves and began to perform surgery with his fillet knife. I stood guard with a can of bear spray, watching in all directions for a predator that might be lured by the fresh carcass. Ravens crisscrossed over us, impatient to resume dining. 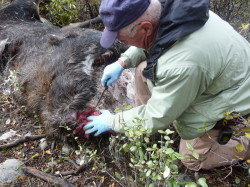 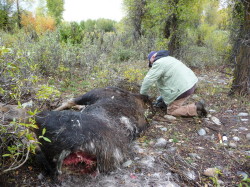 After an hour, with fingers stiff from cold, we gave up for the day. “We’ll come back tomorrow with more equipment,” Chuck said as he peeled off his gloves and stashed the knife. Reluctantly, we returned to our car.

The next day Chuck resumed work on the carcass as I stood guard once again with bear spray, paying particular attention to the direction of the wind. Even with proper tools, the work was slow and difficult. Unable to see beyond some of the tissues and ligaments, Chuck fingered the remaining ties to the rest of the neck vertebrae, slicing whatever held it to the carcass. Finally, he placed a crowbar between the vertebrae and, after much working back and forth, popped it loose. At that point we could finally identify it positively as the “atlas” or first neck vertebra. 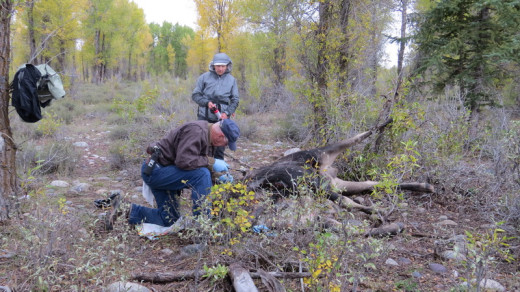 Work remains to clean this bone from its remaining tissues, but eventually it will join atlases I have collected from other animals to compare their sizes and demonstrate how larger neck vertebrae allow more muscle attachment to carry heavy heads and antlers. These vertebrae educate and help relate the story of skulls. 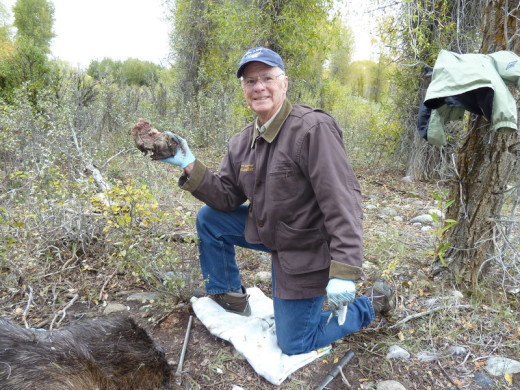 Thanks to our good friend Gaylia Hudgins for accompanying us on the second day and supplying one of the pictures!