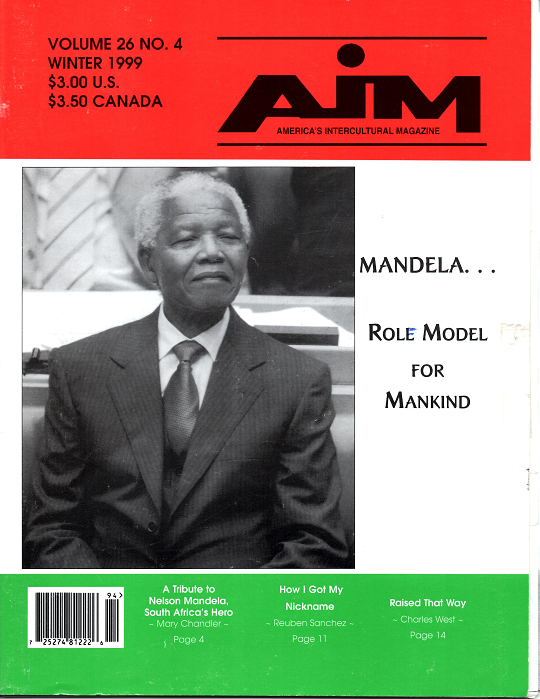 This week’s unrest across the country reminds me of my own biases instilled in me as a child in the 1950s and how a young black boy in the 1980s helped me overcome this prejudicial upbringing.  I wrote this article over 20 years ago, and it was published in AIM Magazine’s winter, 1999 issue.

“What are you doing with that gun?” I asked the little black boy on the playground during recess.

“Nothin’!”  He turned his back to me.  No other children played nearby as this boy repeatedly blasted imaginary villains with his toy pistol.  But even though I didn’t know of any rules against children carrying toy guns in their pockets in 1980, as a substitute aide in this neighborhood elementary school I knew he shouldn’t wield it on the playground.

The young boy hunched his shoulders as if to protect the possession he cradled in his hands.  “I don’t wanna!”

I had no patience for disobedience, especially from a minority I’d been biased against since my own childhood in the 1950s near Washington, D.C.  “Give it to me,” I said.

“What’s your name?” I demanded.

“Nothin’!”  He spat the word out like a snake flicking its tongue.

“Okay, Nothin’.”  I reached for the gun, but the boy stuffed it into his pocket as he whirled to face me.  He couldn’t have been more than seven or eight, but defiance clouded his eyes.  “Let’s go talk to your teacher,” I said.

“No!  Don’t take me to my teacher!”  Alarmed at the mention of authority, he backed away.  “I put it away.  See?”  He pointed a grimy finger down the ripped opening at the side of his pants.

Instead of a little boy before me, I saw a juvenile delinquent.  Intolerance instilled in me from a younger age than this child resurrected my mother’s warning one day in Sears’ toy department in 1953.  “Don’t toot on that toy horn,” she’d said when I picked up a plastic trumpet.  “Some little colored kid might have done it before you.”  Then other visions flashed across my mind.  In the early 1960s, when six black students integrated my high school, I was forced to sit next to one in geography class.  I didn’t talk to her.  I merely glanced at her from the corners of my eyes, never considering apprehensions she must feel as the only one of her race in class.  Later, during my second summer of college, newly-instituted Affirmative Action laws displaced me from my previous government summer job.  I couldn’t understand how an inexperienced minority could snatch away a job I’d been praised for.

But times had changed, and I liked to think my prejudices had vaporized with the Civil Rights movement, until I was confronted by the boy in front of me now.  “All right, Nothin’,” I said, gesturing toward his pocket.  “Keep it there.  And don’t bring it again.  OK?”

The young black boy nodded, then followed me until the end of recess.  I wondered why he didn’t run off to play with others.

“What’s with that kid?” I asked his teacher as class resumed.

“Oh, he’s new.  His mother says they’ve moved just about every year since he was born.  He’s had a hard time making friends.”

Except for my prejudices, I might have felt sorry for the boy.  Instead, I assumed his situation was typical of his race and gave it no more thought.

Until the next day.

“I left it home today,” Nothin’ said as he ran up to me at recess.

Suspicious of his intentions, I frowned at the boy.  But his attitude this day revealed none of the anger and resentment of yesterday.  “Well, Nothin’,” I said finally, “I appreciate that.”

For the first time, a smile spread across his face.  “Come here,” he said, “I want to show you somethin’.”  His hand reached out and slid around mine.  Feeling his dirt-caked black fingers against mine, I started to pull away.  But his questioning glance forced me to reconsider.  I could wash later.

As he led me across the playground, I felt I had to say something.  “So, Nothin’,” I said, “how’s school going?”

He shrugged. “OK, I guess.”  That could have been the same answer my own son would have given.  Nothin’ was only a few years younger than he was.  Then he added,  “But I don’t do too good sometimes.”  In different words, my son could have said that, too.

Nothin’ stopped where a vacant meadow dipped down from the end of the playground.  “Look there,” he said pointing to a drainage pipe extending from under the blacktop.

I bent down and peered into the pipe, but could see nothing unusual. “Where?” I asked.

Nothin’ squatted close to the pipe and poked his finger against a spider’s web.  A large brown spider skittered to the far end of its home.  “There.”

Chills prickled the back of my neck.  Spiders have always repulsed me.  But gathering all my courage, I stooped closer for a better look.

“He’s my friend,” Nothin’ said. “I haven’t showed him to nobody else.”

The spider wiggled back to his original spot, and I jerked back.  My son had once laughed at my cowardice in a similar situation.  “Well, why did you show him to me?” I asked Nothin’.

“’Cause now you’re my friend too.”  The teacher’s words echoed in my mind:  he has a hard time making friends.  Did he consider me his friend because I didn’t report him to his teacher?

When I returned to the blacktop, Nothin’ abandoned his spider friend and once again followed me until the bell rang.  When recess ended, I didn’t bother washing my hands.

For the next few days, Nothin’ sought me out during recess after he’d checked on his spider friend.  Although I was beginning to mellow toward this little black boy, I still felt awkward talking with him.  “So,” I’d say each time he approached me, “how’s school going?”  Usually he had the same answer.  “OK, I guess.”

One morning, after learning from my son that he was chosen by a couple of jocks as number six on a list of the ten nerdiest kids in his sixth grade, I felt dejected.  When Nothin’ found me at recess, I absently asked him how school was going.  “OK, I guess,” he said.  “But I wish I could play ball with those kids.”

I followed his gaze to a small group of boys tossing a Nerf football.  “You good at that?” I asked him, thinking of my son’s clumsy attempts at sports that labeled him a nerd.

For some reason, I’d assumed Nothin’ would be a natural at sports.  Wasn’t that typical for his race?  “Why don’t you practice with your dad?” I asked.

“I don’t got no dad.  And my mom’s too busy.”  At least the pain my son suffered at the hands of school jocks could be salved by a compassionate father who was available for an occasional game of catch.

Several days later when Nothin’ searched me out at recess, he held a daisy in his fist.  “This is for you,” he said, presenting me with the wilting yellow flower.  “I picked it special in the lot on the way to school.”

I took the flower in my fingers as I had many times accepted such gifts from my own son.  “Do you like it?” Nothin’ asked.

My throat tightened when I looked into the anxious eyes of the little boy in front of me.  Without realizing it, I no longer saw his color.  I had grown to like this child and to feel for the difficulties he suffered.  Blinking back sentiments of my affection, I brushed my hand across his stiff, close-cropped hair.  “It’s just about the most beautiful flower I’ve ever seen, Nothin’,” I said.  Nothin’ beamed.

The next day, Nothin’ didn’t seek me out at recess.  I knew he was at school because I’d seen him earlier in class.  Wandering through games of tetherball and groups of jumpropers, I finally spotted him near his spider friend.  Another boy his age peered with him into the drainpipe.  Together they burst out in laughter, then ran off toward the jungle gym.  Nothin’ had made a friend.

Shortly after that, my substitute stint ended at this school.  I missed visiting with Nothin’, and as years elapsed and I was confronted with other children, I often thought of Nothin’ and tried to judge each child on his own merits.

One evening, when my children were older and I’d given up working at schools to pursue my original vocation, my husband and I drove to the local high school to attend a concert.  As we climbed the stairs to the entrance, we stopped when someone called out,  “Hey, Mrs. Mulcahy!”  I turned in the direction of the voice and saw a tall, handsome black boy of about fourteen parking his bicycle nearby.  He knew my name, but I struggled to recall who he might be.

I gasped.  “Nothin’!” I cried.  In the short period I’d known Nothin’, it had never occurred to me to ask his real name after our first encounter.  And since his teacher had told me he’d moved often, I never thought he’d have the opportunity to remain in this school district.  Throwing my arms around his brawny body, all I could say was, “So, how’s school going?”

“Pretty good,” he said, grinning broadly.  “I keep my grades up so I can run track.  I want to get good enough to go to state in a couple years.”

14 thoughts on “Somethin’ From Nothin’”